I use both field and theoretical techniques to investigate the fundamental processes driving large-scale continental deformation. It is important to understand these processes because over tens of millions of years they, in combination with surface erosional processes, are responsible for shaping the earth as we know it: the configuration of the continents, the locations and sizes of mountain belts, and the regions of significant earthquake and volcanic hazards.

Mountain belts occur when the forces exerted on plates exceed the intrinsic strength of plates (the ability of plates to resist deformation). Determining the relative importance of these forces is fundamental to understanding the dynamics of continental deformation. I am particularly interested in the western United States deformation because this region is far from the plate boundary, so that boundary forces are unlikely to be responsible for creating the mountains. My colleagues and I have calculated the distribution of buoyancy forces in the western United States. We show that, given available constraints on lithospheric strength, buoyancy forces are sufficient to produce the wide variety of rates and styles of observed deformation (including its absence in some locations like the Colorado Plateau). Thus plate boundary forces, while probably present, are not required to drive active deformation in the western United States east of California. Current work is under way to understand the relationship of present and passt deformation in the Western United States to the available driving forces and lithospheric strength.

I am also interested in understanding strike-slip deformation. In some, but not all, large strike-slip faults, paleomagnetism has demonstrated that crustal blocks are rotated around vertical axes as much as 90-100 degrees. However, the controls on the distribution along and across strike are poorly understood. In the Las Vegas Valley Shear Zone, Nevada, and in Sardinia, Italy, I and my colleagues have found paleomagnetic evidence for rotations that systematically decrease away from the major faults. However, in other strike-slip fault zones, other workers have found that crustal blocks rotate uniformly, like sets of dominoes. Why are there such fundamental differences in behavior? Mathematical modelling using both continuum and distinct element approaches helps us to understand the dynamics of such deformation, in particular the controls on the size of blocks and the physical mechanisms for crustal block rotations.

More broadly, I am interested in mathematical modelling in general, and have found this to be a satisfying means of collaborating with colleagues in other fields.   For example, I am working with my colleague Prof. Feng to make and use mathematical models to analyze water isotopes used as tracers in soils, pine tree needles, and the atmosphere. These models allow us to understand how processes such as evaporation, transpiration, and precipitation interact, and how climate change might be affecting these interactions. 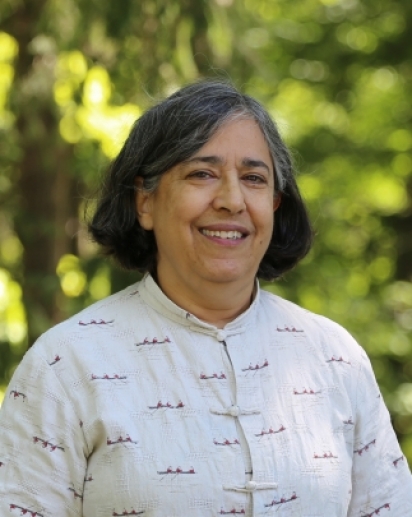