Mark Williams received both of his graduate degrees in Critical Studies from The School of Cinema-Television at The University of Southern California. He has previously taught at USC, Loyola Marymount, UC Santa Barbara, and Northwestern. His courses at Dartmouth include surveys of U.S. and international film history, television history and theory, and new media history and theory.

He is the director of The Media Ecology Project (MEP), an NEH-supported digital resource at Dartmouth which is developing a virtuous cycle of new interdisciplinary scholarship about archival media that adds value back to participating archives.

As the name of the project suggests, MEP is fundamentally 1) a sustainability project that 2) develops literacies of moving image and visual culture history, and 3) functions as a collaborative incubator that fosters new research questions and methods ranging from traditional Arts and Humanities close-textual analysis to computational distant reading. New research questions in relation to these workflows will literally transform the value of media archives and support the development of interdisciplinary research and pedagogy/curricular goals (e.g., media literacy) regarding the study of visual culture history and its legacies in the 21st century

He has published in a variety of journals and anthologies, for example The Routledge Companion to Media Studies and The Digital Humanities; A Companion to the History of American Broadcasting; The Arclight Guidebook to Media History and The Digital Humanities; Télévision: le moment expérimental (1935-1955); Convergence Media History; New Media: Theories and Practices of Digitextuality; Collecting Visible Evidence; No Laughing Matter: Visual Humor in Ideas of Race, Nationality and Ethnicity; Dietrich Icon; Television, History, and American Culture: Feminist Critical Essays; and Living Color: Race, Feminism, and Television. He is a co-editor and contributor to Rediscovering U.S. Newsfilm: Cinema, Television, Archive (AFI Series, Routledge, 2018). His book Remote Possibilities, a History of Early Television in Los Angeles, will be published by Duke University Press.

At Dartmouth, he chaired The Department of Film and Media Studies for 8+ years. In conjunction with the Dartmouth College Library, he is the founding editor of an e-journal, The Journal of e-Media Studies. In 2005, he directed the Leslie Center Humanities Institute entitled Cyber-Disciplinarity, a foundational event in developing Digital Humanities at Dartmouth. With Adrian Randolph, he co-edited the book series Interfaces: Studies in Visual Culture for the Dartmouth College Press/UPNE. He founded and has twice directed the Dartmouth off-campus program in Los Angeles for The Department of Film and Media Studies.  He received two Neukom Institute grants and a Scholarly Innovation and Advancement award to build and develop The Media Ecology Project (MEP).

With Michael Casey (Dartmouth Music, Computer Science), he received an NEH Digital Humanities Start-Up Grant in 2011 to build the ACTION toolset for cinema analysis. In 2015 he received an NEH Tier 1 Research and Development grant with John Bell (Dartmouth Information Technology) to build the Semantic Annotation Tool (SAT) for use in The Media Ecology Project. In 2016, with Lorenzo Torresani (Dartmouth Computer Science) and the participation of The Internet Archive, he received a Knight Foundation grant to develop computer vision and machine learning capacities for moving images.

In 2019 Williams and Bell received two advancement grants from the NEH to further develop the MEP Semantic Annotation Tool for expansive studies of 1) early silent cinema, and 2) civil rights television newsfilm. This research is detailed in “The Media Ecology Project: Collaborative DH Synergies to Produce New Research in Visual Culture History”, Digital Humanities Quarterly (15:1, 2021). In 2021, Williams led the initiative for a Dartmouth MOU with Shanghai University to collaborate on Media Ecology Project research.

He has mentored dozens of Dartmouth students in relation to MEP grant research and related studies, and looks forward to continuing this legacy. New research directions include an international project to study the Cold War motion picture activities of the US Information Agency; a series of projects studying the value to higher education for the vast newreel collections of The Sherman Grinberg Library in Los Angeles; international studies of early cinema in China in conjunction with Shanghai University; studies with Red Hen Lab to enable automatic formal analysis (e.g., cut detection); and studies to explore the AI development of 3D research spaces derived from 2D historical motion pictures. 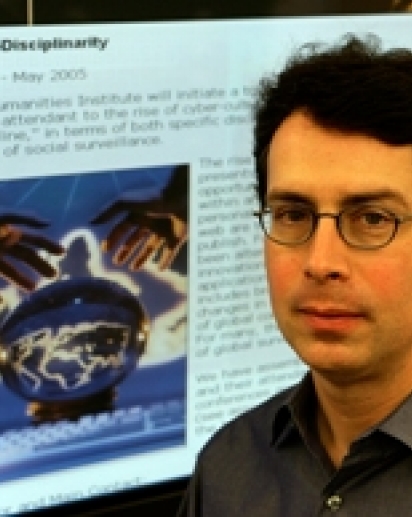