I am a cultural historian with a special interest in the making and dismantling of borders between ideologies, territories, languages, and mediums. In other words, I gravitate to strange topics and work between disciplines.

My first book, The Icon Curtain: The Cold War's Quiet Border (University of Chicago Press, 2015), is about the German wall that didn't fall in 1989. It tells the story of how contemporaries (German refugees, especially) dramatized an uneventful Cold War landscape, which stretched between West Germany and Czechoslovakia, and brings together travelogues, accounts of defaced Christian imagery, poems, and a host of archival sources. The book received Honorable Mention for the Modern Languages Association's biannual Aldo and Jeanne Scaglione Prize for Studies in Germanic Languages and Literatures for 2014-15. A Chinese translation appeared with the Shandong Pictorial Publishing House in 2018.

Together with Irene Kacandes, I co-edited the volume Eastern Europe Unmapped (Berghahn Books, 2017), which pushes against the perception that for this part of the world, geography has been destiny. The topic of Eastern Europe beyond its geographical borders runs through my research on the Cold War broadcaster Radio Free Europe. Drawing on the station's corporate archive at the Hoover Institution, I have written book and journal articles about its meanings for televisual history across the Atlantic.

With Michelle Moyd and David Gramling, I co-wrote a programmatic book Linguistic Disobedience: Restoring Power to Civic Language (Palgrave Pivot, 2018). Its gist appears here and here. This project, which appeals to academics as much as to journalists, has been key for compelling me to think more deeply and collaboratively about the political aspects of language use and multilingualism, in particular. This work has grown into the public-facing initiative Political Language in Multilingual Societies. Recent events include a symposium on antifascist language and a workshop on countering the far right in translation. Please get in touch if you are interested in getting involved.

I am currently writing two books. The first, The Parents of Curious George: The Untold Story of Margret and H. A. Rey, is a deeply researched biography of the noted children's authors, Margret and H. A. Rey, and an unnatural history of their creation, the "monkey" Curious George--one of the world's most famous and successfully marketed literary characters. It uncovers the Reys' Northern German roots and their families' global colonial connections, on the one hand, and traces their circuitous migrations, on the other, to introduce Curious George as a repository of changing cultural, zoological, and social knowledges, rather than a stable, two-dimensional character. Public writing related to this project has appeared in LA Review of Books and Hypocrite Reader.

The second book, about tightrope walking as a mirror of German history between spectacle and philosophy in the first half of the twentieth century, has grown out of my essay is "On the Wire above the Ruins" in The Cabinet Magazine. It focuses on just one troupe, the Camilla Mayer Troupe, and its exceptionally dramatic trajectory with links to romancing the heights and Alpinism, to stratospheric flight and aereal bombings, to Nazism and the Holocaust, to Germany's postwar reconstruction and its Cold War division. It will be published in The Cabinet's Magazine's book series.

You can find my academic articles on https://dartmouth.academia.edu/YuliyaKomska. I am passionate about rigorous public writing and have published with The Washington Post, Reuters, The Guardian, The Smithsonian Magazine, Boston Review, Euronews, LA Review of Books, Pacific Standard, Al Jazeera America, and others. I am always thrilled to work with students interested in pursuing this kind of work and frequently assign various forms of public writing in my seminars.

I teach across the German Studies curriculum (including language) and in Comparative Literature, where I am also active in M.A. advising. My teaching interests include, aside from the core German Studies courses, critical animal studies, circus cultures, biography, graphic arts and book illustration, Cold War culture, German environmentalism, propaganda, science fiction under socialism, civic language and linguistic justice, multilingualism and monolingualism, and belonging in Germany. I use 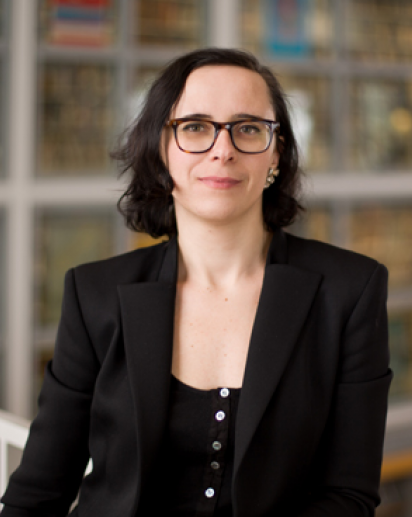